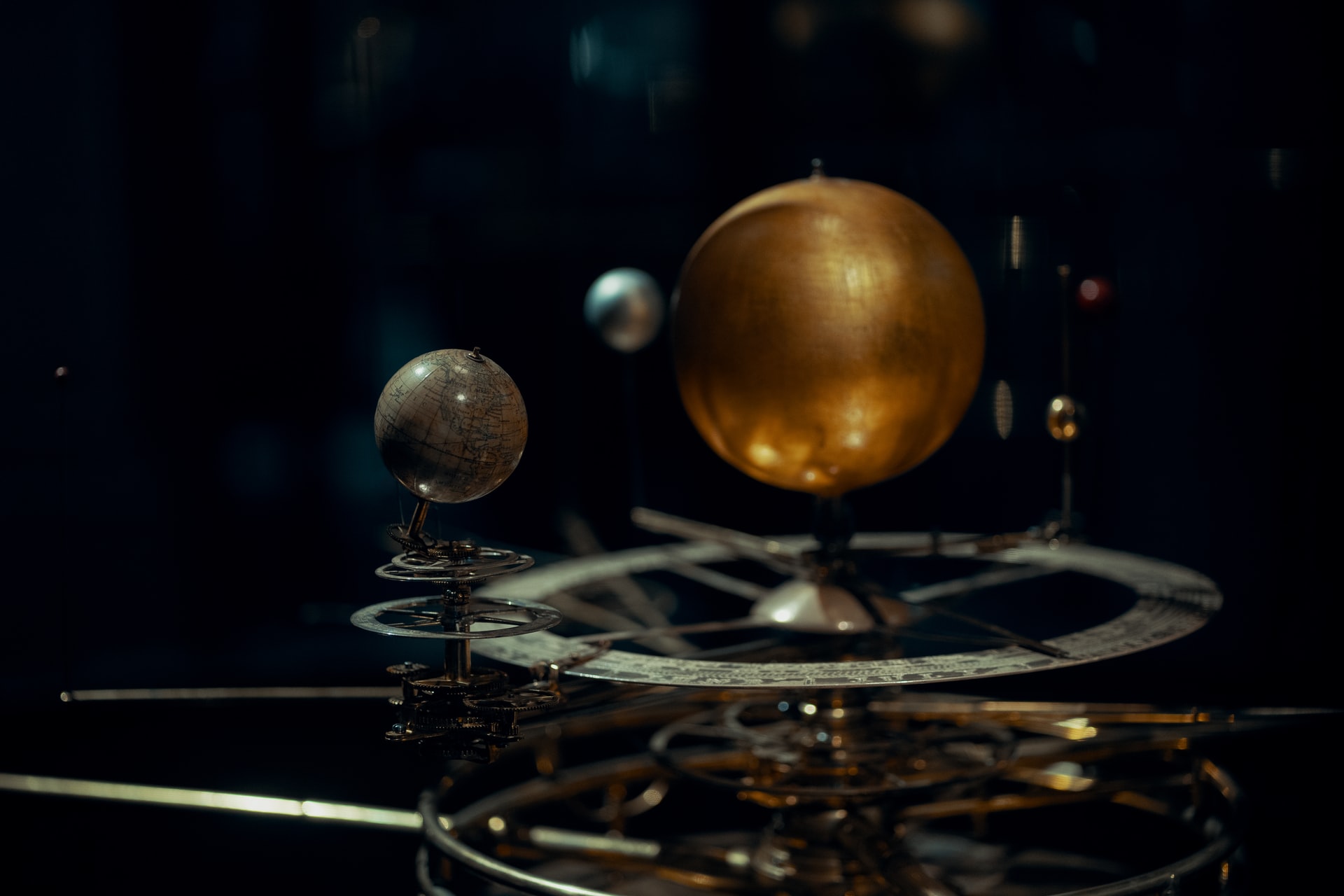 What is the definition of Orrery?

Orrery is a mechanical representation of the Solar system. Usually, the Sun is in the middle with planets in different sizes circling around it. The purpose of an orrery is to show how planets move, their axis, and their correlation with their moons and other planets.

When was the Orrery invented?

There were orreries in ancient times already. People have always been fascinated by planets and the sky (heavens). Orrery was used by the Greeks and Romans. But, it got its name much later, in 1704 when it was presented to Earl of Orrery, and the rest is history. You can check out how it looked on Science Museum’s website or in person, on display available after contacting the museum first.

How does an Orrery work?

Orrery has a clockwork mechanism that powers and turns the installation. It doesn’t need electrical power to run.

Shop for Orreries on the Internet

Etsy is a great source of unique finds. Etsy users will surprise you with antique and modern orreries of all shapes, sizes, forms, and colors. Type in the search bar “orrery” and prepare to be amazed.

You can buy originally designed and wonderfully handcrafted orreries by Staines & Son from England. They produce and sell three distinctively designed models of the orrery. Orrery of your choice will be a unique item because they are handmade, beautiful, and accurate. It will come on an American walnut base with an engraved brass ring describing months and seasons. For prices, you should contact them via e-mail provided on their website.

2. Tellurion Orrery (demonstrates the movement of Earth with Moon around the Sun)

3. The Genesis Orrery (complex mechanism with nine planets and their moons)

You can observe the Solar system in real-time on exciting NASA’s website dedicated to Solar system exploration. You can click and move the system, zoom in and out, to see the positions of planets, satellites, the Voyager, Halley’s Comet, etc. Exciting stuff!

How do you make an Orrery?

You can buy a pre-made kit that you have to assemble. Check out Eaglemoss solar system section and their amazing orrery kits.  They come with a collector’s magazine that has great assembly instructions, stunning photos, and plenty of useful information about our Solar system.

Another way to go is following the instructions on zeamon.com. Zeamon provides detailed downloadable instructions and plenty of additional photos to help you with your build. If you are persistent and precise enough to go through this lengthy process, your final product could end up looking something like this:

For modern-day orrery enthusiasts who want to combine their 3D printing hobby with the love for astronomy, there are online resources that can help you realize your dreams.

Check out this exquisite model on instructables.

DeMoor Orrery offers the chance to buy their orrery models, but also encourages hobbyists to dive into the adventure of making one on their own. You can find free downloadable documentation on their website.

Fans of Harry Potter movies could have noticed Orreries appearing in Harry Potter and the Goblet of Fire. Albus Dumbledore’s Headmaster’s office had many interestingly looking orrery-like objects. A miniature orrery also made an appearance:

“Professor Trelawney bent down and lifted, from under her chair, a miniature model of the solar system, contained within a glass dome. It was a beautiful thing; each of the moons glimmered in place around the nine planets and the fiery sun, all of them hanging in thin air beneath the glass. Harry watched lazily as Professor Trelawney began to point out the fascinating angle Mars was making to Neptune.”

These stunning watches are truly works of art. They can be compared to miniature ballets on your wrist. The movement is unimaginably complex and the watches are unique in every sense. I am sure you have to look twice when you want to see what time it is. The first time is just to admire the beauty of the watch. Then, you can take a second look to see the actual time. We invite you to admire it from afar, on YouTube, as there are not many people that can afford its hefty, half a million dollar, price tag.

Why should you buy an Orrery

If you are fascinated by miniature worlds, make sure to check out our post TERRARIUMS: OUTLANDISH GARDENS IN A JAR